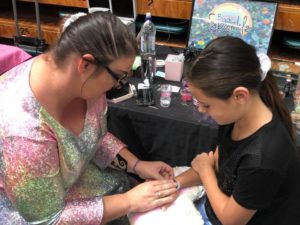 Born to Sparkle’s graphic designer Mark Redenbach (AKA Mr Sparkles) discusses the inspiration behind the new range of dinosaur glitter tattoos which were released today as part of a special two year old’s birthday celebrations.

“The 1993 release of Jurassic Park coincided with my 11th Birthday.  My mum let me book tickets in advance for me and all of my mates in the back row of the local cinema for the occasion.  Looking back I realise how lucky I was to have mum pay this for me. It was an absolute blockbuster of a movie changing the way we look and think about dinosaurs and introduced the world to genetic engineering.  Kids were always interested in dinosaurs but I think this movie bought the level of interest to the next level.

One of our customers asked for dinosaur themed tattoos for their birthday party.  Remembering the joy of my 11th Jurassic Park birthday party and the current release of the Jurassic World Fallen Kingdom, I was inspired to re-work our dinosaur glitter tattoo range.

The first dinosaur to be updated was the Velociraptor.  When I’m out and about sparkling most of the younger kids know which tattoo is the T-rex and some of the really bright sparks will also know about the stegosaurus.  However, only the oldies will know which is the velociraptor.  I think this relates to us oldies watching the old Jurassic park movies which featured this lethal animal.  After doing a bit more research into this dinosaur I learnt that the Jurassic park depiction of the Velociraptor is not quite correct.  Scientists claim that it probably had feathers and was only a few feet tall.  In keeping with the Jurassic Park theme, our Velociraptor has been kept true to Hollywood form.  I also added a Velociraptor footprint tattoo which is probably the best way to show the lethality of the velociraptor.

After I completed the project I ended up with 15 dinosaur designs. Our tattoos also have a footprint or track for each of the popular dinosaurs.  I initially thought that a footprint is a very boring design but they tend to be quite popular.  There is something about it that captures the imagination and really lets you see how life is like in their shoes.  Researching dinosaur footprints was a bit more work than I expected as dinosaur feet are quite different from any animals around today and because there is not a large fossil record of dinosaur footprints.  Our designs were based on actual fossilised footprints or a best guess based on what I could find from the internet.